The Pro Concordia Labor flag was designed in 1897 by Countess Cora di Brazzà. Having worked for the Red Cross shortly before she designed the flag, di Brazzà appreciated the power of visual symbols and recognized that peace workers lacked a single image that unified their work. Aware of an earlier idea for a peace flag that incorporated pre-existing national flags proposed in 1891 by Henry Pettit, di Brazza felt that the earlier design was inadequate. Pettit’s design was simply to place a white border around a given nation’s flag and to add the word “Peace.” But this approach resulted in as many peace flags as there were national flags. Needed, however, was a single universal symbol of peace that transcended national identity and symbolically communicated the cosmopolitan values inherent in peace-work. Accordingly, di Brazzà designed the Pro Concordia Labor (“I work for Peace”) flag. The colors of yellow, purple and white were chosen because no nation’s flag had these colors, making it impossible for the spectator to confuse the Pro Concordia Labor flag with any pre-existing national flag. Freed from this potential confusion, the spectator who beholds the distinctive yellow, purple and white banner, becomes prepared to associate the colorful object with the values that motivate international and cosmopolitan work, namely “the cementing of the loving bonds of universal brotherhood without respect to creed, nationality or color” - values which were considered to be expressive of “true patriotism.” The Pro Concordia Labor flag is a visual representation of the specific values inherent in “true patriotism” that undergird peace-work.

The clasped hands atop the center shield are an important part of the flag’s symbolism. They represent the insight that the task of developing humanity and creating a peaceful world must be a joint venture undertaken by both men and women who labor for these goals together. The spiritual development of humanity – symbolized by the placement of the colors - is another important feature of the flag. Bertha von Suttner, the most famous peace worker of di Brazzà’s time who inspired Alfred Nobel to create his Peace Prize, spoke often of the evolution of the human species. “Humanity develops upward,” she said, and “we are called to hasten the development of a higher and more fortunate type of human being.” The Pro Concordia Labor flag symbolically represents these sentiments.

When Susan B. Anthony commented on the flag in 1897, she observed the flag’s connection to the profound relationship between one’s “inner world” and peace work. As she lay her hand on her breast, Anthony noted that “the first person to begin this work of peace is right here.” Di Brazzà not only agreed with this, she created a personal tool to assist the individual in undertaking this personal peace work. The “Universal Peace Badge” - a device utilizing the center shield of the Pro Concordia Labor flag - was invented by di Brazza to provide assistance in developing the “inner resources” so that one can begin the work of practical, personal peace, and, ideally, develop into an instrument of peace.

The flag was first adopted on August 27, 1897 by the Universal Peace Union at its 31st annual convention in Mystic Grove, Connecticut, U.S.A. On October 27, 1897, it was adopted by the U.S. chapter of the International Council of Women and the motion adopting it by the Council can be read here.

The flag was revived for an event aptly entitled ‘Pro Concordia Labor’ which was held on August 27, 2013 - on the eve of the centenary of the Peace Palace - in Delft, The Netherlands. The event was organized to celebrate Bertha von Suttner’s legacy on women, peace and international law and her connection to the Peace Palace in The Hague. You can learn more about that 2013 event here.

Bertha von Suttner did indeed meet Countess di Brazzà and referred to her as a ‘Friedensschwester’ (‘peace sister’). In 2014, the centenary year of Bertha von Suttner’s death, the Pro Concordia Labor flag was put on display at the permanent Bertha von Suttner exhibition at her former castle (schloss) in Harmannsdorf, Austria, which you can see here. 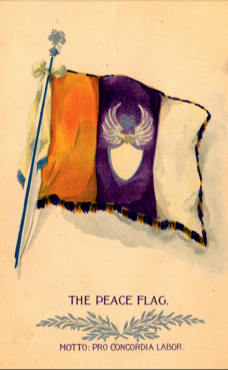 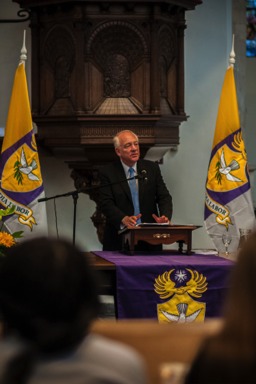 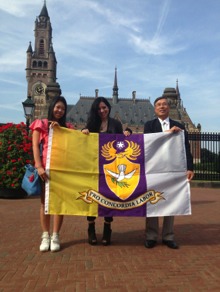 Kim Hyeyeon, Hope Elizabeth May and Dr. Chung Koo-do, chairman of the No Gun Ri Peace Foundation in front of the Peace Palace, The Hague (September 5, 2013).